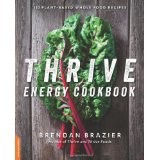 Help support VegansEatWhat.com – purchase this book via our Amazon link!

Brendan Brazier has been publishing vegan cookbooks in his “Thrive” series since 2009.  For those of you who are unfamiliar with this series, it incorporates Brazier’s Vega brand of supplements, vegan lifestyle and satisfying and nutritious food.  He utilized all of these to fuel his athletic career.  Brazier’s background include years of endurance event successes (he was the Canadian 50 kilometer champion and winner of various triathlon events), and creation of the Vega Vegan supplement line.

There are a number of interesting sauces in this book. One we tried and enjoyed as a spread on crackers was an Artichoke Tapenade.  It went together quickly and improved in taste over time. We also tried a Chipotle Corn Chowder that was fast and very tasty.  We used only 1 teaspoon of the chipotle peppers and it was plenty spicy. I cannot imagine what the heat level would have been with the recommended 2-3 tablespoons of the pepper and I do not consider myself heat/spicy averse at all when it comes to food.

Thrive has beautiful photography which makes it fun to read.  Many of the recipes are for smoothies, juices, drinks and desserts.  This is not my preferred type of cookbook, but if you are looking to increase your recipe cache along those lines this is a book worth considering.

Living in Colorado, one concern I have is that many of Brazier’s sauces rely upon a Wildwood brand of Aioli Sauce that is not available here nor could I find on the internet. You can buy another brand or make your own aioli sauce, but that may alter the end result.  Ideally, we would have like to see an aioli sauce recipe included in the book.  Brazier also recommends a Canadian brand of bread, but that may be less of a concern.

Overall, I think that those who have enjoyed Brazier’s “Thrive” books in the past will find this addition to the series another good source of healthy vegan recipes.