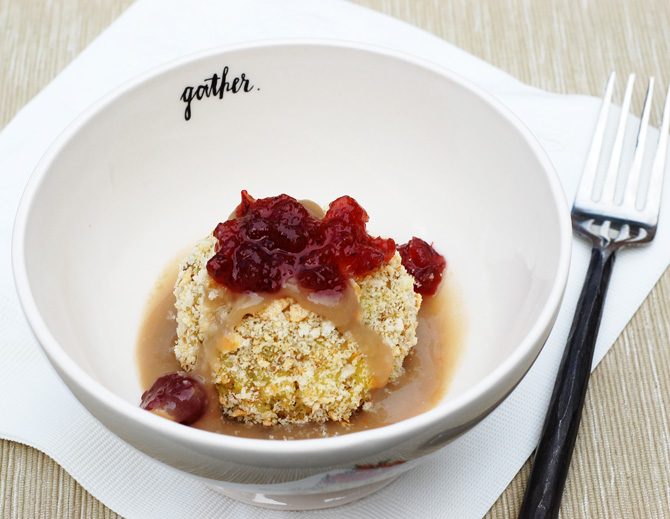 This festive recipe can be served as an appetizer or as part of the main meal and is a wonderful way to get kids/family cooking together!

Put the potatoes in a soup pot and cover with water. Bring to a boil, then lower heat to medium and cook for 12 to 15 minutes, until they are easily pierced with a fork. Drain and set aside to cool.

Follow the directions on your stuffing by boiling the amount of water or vegetable broth called for, then remove from heat, stir in the dry stuffing, and let sit covered for about 10 minutes or until it's absorbed all the liquid.

In a large mixing bowl mash the small potatoes as is, with the peels on. Mash with a potato masher leaving only small pieces of potato. Note: you can add up to ¼ cup olive oil if you want. I decided the fat in the gravy was enough to carry the dish. Stir in the milk, salt, sage, celery seeds, rosemary and pepper. Then stir the dressing into the potato mixture. Preheat oven to 350 degrees and cover 2 large baking sheets with parchment paper.

Repeat until both sheets are full of ready to bake balls. Bake large ones for about 20 minutes or until hot in the center, small ones for about 12 minutes.

This recipe is from Kathy Hester at Healthy Slow Cooking (http://healthyslowcooking.com/