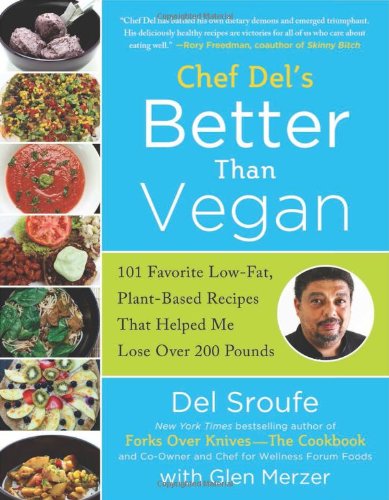 Help support VegansEatWhat.com by buying this book on amazon

Del Sroufe’s journey to the status of vegan cookbook guru has been far from the normal “trip”.  Srourfe grew up in Columbus, Ohio, where his large, extended family still lives.  They had connections to a family farm in southern Ohio where his paternal grandparents fed the family large hearty meals for all occasions.  Those meals were of the SAD variety, the Standard American Diet that is killing people with every forkful.  Del, by his own admission, could put away a half of a loaf of white bread smothered in butter and sugar as a “snack” as an adolescent.  He and one of his brothers were placed on an 800 calorie a day diet while they were still in grammar school due to weight issues.  Not surprisingly,Del couldn’t stick with it.  As the reader quickly learns, Del had more than a few issues with food.  By the time he was 40, he found his weight had increased to over 300 pounds.  And this was while he was managing a vegetarian restaurant!  Within two years he weighed in at 475 pounds following a strict Vegan diet.  That was the last time he got on a scale until he began the program with Dr. Popper.

Del’s renaissance began when he connected with Dr. Pam Popper.  Del already was vegan but what Dr. Popper brought to the equation was a “healthy” vegan diet.  Del had gained his weight by eating a lot of oils and processed foods, all vegan.  With Dr. Popper’s modification of his diet, Del has lost 245 pounds and is still working on losing more.  His recipes embrace Dr. Popper’s “low fat, oil free” approach to cooking.   As Del writes, when he began cooking oil free his customers said “The food tastes as good as ever, but now it is not greasy.”

Del became a celebrated chef of the Wellness Forum Program that Dr. Popper directed.  His innovative recipes have helped thousands turn their lives around through proper diet. This success allowed him to become the main recipe contributor and author of the Forks over Knives Cookbook in 2012.  Sroufe’s solo undertaking, Better Than Vegan, was published in 2013.

The recipes we tried were “Bangkok Noodles” and “Del’s Big Breakfast Casserole”.  The Bangkok Noodles make use of a cauliflower puree recipe that adds a creamy richness to the dish.  We noticed that Del makes use of this cauliflower recipe in a number of his other dishes as well, preferring this low-cal, no oil addition to other higher calorie possibilities.  In his Big Breakfast Casserole Del makes use of Chinese as well as Japanese silken tofu to replicate the creaminess that would often be accomplished by incorporating high fat oils and cheeses.  We found the recipes we tried to be tasty and not complex.  We will be trying more of the recipes in Del’s book as time allows.

Not all of the recipes have photographs; however the pictures included are very beautiful and appetizing.  Unfortunately, for those wanting the dietary make-up of the dishes presented in Del’s book, this specific information is not provided.  However, if you are someone in search of inventive, delicious, very low-fat vegan recipes, I suggest you give this book a look.