Why Love Some Animals and Eat Others? 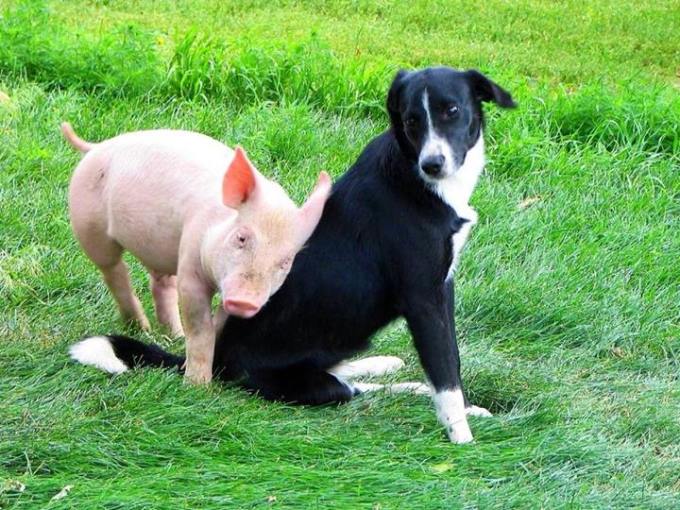 Americans have 83 million dogs as pets.  We have 95 million cats as pets.  Last year we spent approximately $58 billion on our pets.  Americans spent $370 million just on Halloween costumes for their pets last year.  In one survey 9 in 10 Americans consider their pets to be members of the family.  We have names for them.  We buy them gifts.  They sleep with us.  They are our companions.  We mourn their deaths.  We love them.

On an average day in the United States,  24 million chickens, 360,000 pigs, and 130,000 cattle are killed for us to eat.  In the time it takes you to read this article, over 75,000 animals will have been killed for us to eat.  Over 95% of these animals come from factory farms.  Our laws provide no protection for these animals and give their owners immunity to treat these animals as “production units” just like a factory-made table or pair of pliers.  If  you treated your dog or cat in the same way that factory farm owners treat their animals, you would be arrested and criminally charged with animal cruelty.  You would go to jail.

Why do we love some animals and eat others?  For the first four decades of my life I ate animals.  Why?  I loved my dogs and mourned when they died.  Yet I gave no thought to ordering a hamburger and the cow that died so I could eat that hamburger.  I loved bacon, but I never considered the suffering of the pig that was part of my breakfast.  How could I consider our dogs part of our family and yet give no thought to the animals that I was eating?

ANSWERS I HAVE HEARD

No question perplexes me more than why we love our companion animals but call other animals “lunch.”  I’ve heard many answers.  “Because I love the taste of meat.” “Because God made animals to eat.” “Because we are at the top of the food chain.” “I only eat humane meat.”

But none of these answers really explain why we eat some animals but love others.  Many in other parts of the world love the taste of dog meat, yet we don’t eat dog meat.  So the answer can’t be taste.  God also made cats and dogs and we don’t eat them in the United States.  So God is not the answer to this question.  Even assuming that we are at the top of the food chain (which is incorrect), that doesn’t explain why we would eat a cow but not a cat.  Accordingly, the “food chain” answer falls short.  Even if you believe in “humane meat” (which I think is an oxymoron) that does not explain why you don’t eat “humane” dog meat.

“Dogs and cats are different than cows and pigs” is on its face a more satisfying answer.  But the more we learn about the animals we eat, the more we learn about how they are far more like our pets than different.  Pigs learn their names and respond when called.  They make good pets.  Cows, pigs and chickens are sociable and affectionate and enjoy the company of humans.  All the animals we eat, just like are pets, are intelligent and feel pain.  So this answer misses the mark.

“Because we get to know our pets and love them” is the best answer I have heard.  But 4-H participants get to know their animals and express love for them, often giving them names.  Yet after showing their animals they sell them for slaughter.  Can you imagine auctioning the dogs for slaughter after the Westminster Kennel Club Dog Show?

There seems to be something much deeper at work that explains why we buy gifts for some animals and eat others.

THE MYTH OF THE  THREE Ns  — EATING ANIMALS IS NORMAL, NATURAL AND NECESSARY

I believe the best answer is that starting as children we are taught to believe in the justness of eating some animals through a series of three myths, the Three Ns.**  We are taught that eating these certain animals is normal, natural and necessary.

The Three Ns are nothing new.  They have been used to justify every past exploitive system from slavery to denying women the right to vote.  The Three Ns are ingrained into us so deeply that they act as emotional blinders when we are confronted with the incongruity between our values towards animals (we care about them) and our behavior towards animals (we eat them).

The social norm of eating certain animals is reflected on most restaurant menus where we typically find only a few vegetarian options and no vegan options.  TV shows, commercials, and movies constantly show imagery of eating animals because it is considered normal to eat animals. It is a social norm to eat turkey on Thanksgiving and ham on Easter.  We accept it because everybody is doing it.

Social norms reward conformity and punish nonconformity.  Eat Tofurky on Thanksgiving and you will likely be asked to explain, and perhaps defend, your choice.  Vegans are called many things, but never called normal.

The myth is that we equate social norms with morally acceptable behavior.  If our parents, friends, teachers, doctors and pastors eat meat then it must be morally acceptable.  But we now know that is not necessarily true because parents, friends, teachers, doctors and pastors once approved of slavery.  Slavery was considered normal.

Social norms are not innate nor do they come from God.  People create and maintain these norms and people can change these norms.  We follow social norms out of habit and not out of any real conscience choice that we have made.

As we each make the conscience choice to stop eating animals the social norm of eating animals can change.  The myth that a social norm is morally acceptable is exposed after the exploitive system that supports the social norm collapses.  We look back at slavery and see that it was not morally acceptable even though it was considered normal at the time.  Hopefully our children and grandchildren will look back someday at our eating of animals and feel the same way.

Followers of the Paleo diet will point out that for over two million years our ancestors ate certain animals, therefore eating certain animals is natural.  Eating animals is the natural order of things.  But infanticide and cannibalism are as old as eating animals and nobody today would say that they are natural.  The myth is that we selectively define something as being natural when we want to make it justifiable.

Nature has been used for centuries to justify violence against certain groups.  Women were naturally designed to be the property of men.  Africans were naturally suited for slavery.

When we look back at the atrocities committed in the name of “nature” we are appalled.  Today we say it is natural to eat certain animals to justify our killing of billions of these sentient animals each year.  But is it justified?  That brings us to the third myth – that eating meat is necessary.

We have been taught from an early age that we need to consume certain animals and their products to survive and to be healthy.  Since we don’t want to eat our pets, we have to eat farm animals to be healthy, right?   Though this myth is less prevalent today than the other myths, it is still promoted through campaigns by organizations such as the United Dairy Industry Association.

“Make the lie big, make it simple, keep saying it, and eventually they will believe it.”

“Our grandchildren will ask us one day: Where were you during the Holocaust of the animals?  What did you do against these horrifying crimes?  We won’t be able to offer the same excuse for the second time around, that we didn’t know.”

Doug Meier is an attorney who practices in Colorado.  He writes regularly for VegansEatWhat.com and can be reached at dougmeier@att.net.

** The Three Ns is a term coined by Melanie Joy, Ph.D., in her superb book, “Why We Love Dogs, Eat Pigs, and Wear Cows.”  In her book she introduces the reader to “carnism” and I highly recommend this book to everyone.

Please Meet Your Meat (a/k/a “Holiday Meal”)
Vegan Men Say What? Guys, If You Have ED It Might Be Your Lucky Day