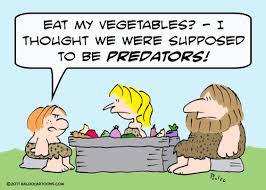 It seems like half of all Americans are on a diet.  And the other half just gave up on their diets.  The Paleolithic diet was Google’s most searched-for weight loss method in 2013.  This weight loss plan is based on modern foods that mimic the foods consumed by our ancestors during the Paleolitic era.  This was a period of about 2.5 million years duration that ended around 10,000 years ago with the development of agriculture.  This Paleo diet is popularly referred to as the caveman diet or the Stone Age diet.

Meat and other animal products represent the staple foods of modern-day Paleo diets.  In other words, if meat was good for our ancestors, the cavemen, then it must be good for us.  The Paleo diet begs the question, are humans physiologically designed to eat meat?

Famed paleontologist and anthropologist, Dr. Richard Leakey, does not think that humans are physiologically designed to eat meat.  He states that humans “can’t tear flesh by hand.”  Instead, our hands are designed for grabbing and picking fruits and vegetables.

Dr. Leakey also states that we don’t have the large canine teeth that carnivorous animals possess that allow them to kill animals and devour raw carcasses.  Instead, our blunted teeth are better suited for eating fruits and vegetables.

Cardiologist William Roberts is the editor in chief of The American Journal of Cardiology and medical director of the Baylor Heart and Vascular Institute at Baylor University Medical Center in Dallas.  Dr. Roberts hails from the cattle state of Texas.  Yet he states that humans are not physiologically designed to eat meat.  He notes that the “evidence is pretty clear” that if you look at the characteristics of carnivores versus herbivores that “it doesn’t take a genius” to see that humans have the characteristics of herbivores.

If Dr. Leakey and Dr. Roberts are not persuasive enough to convince you that humans are not physiologically designed to eat meat, then please read on.

Our jaw and throat is too narrow for anything but small pieces of food.  We cannot swallow food whole and must chew it finely and mix it with saliva before food will slide down the esophagus.  In contrast, carnivores tear off whole chunks and swallow them whole.

Animals that eat meat have an unlimited capacity to process and excrete cholesterol.  For example, a cat could eat egg yolk all day long and would excrete all of it.  It would never suffer from a build up of cholesterol.  However, our livers are like plant eating animals and we have a very limited capacity for cholesterol removal.  Humans were made to consume plant foods which don’t contain cholesterol.  Therefore, we didn’t need a cholesterol-eliminating system.

Our ancestors, the cavemen, also practiced slavery, rape, and cannibalism.  We can now add eating meat to the list of caveman practices from which we have hopefully evolved.

What do Vegan Men Say?  We say, don’t be a caveman.