The True Meaning of Thanksgiving

Posted on November 4, 2014  by Mark Reinhardt  No comments
Tweet 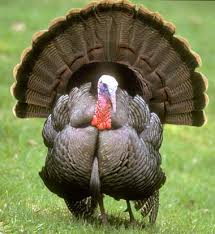 The first Thanksgiving, or so they say, was the fourth Thursday in November, 1620. It being a legal holiday, Irving Schwartz had the day off from his job as an account manager at Plymouth, Bank and Trust and was bumming around the woods with his muzzle-loader. He came upon a wild turkey (not the whiskey, but the bird) with a broken wing and, without thinking, blasted the poor beast into the next life.

Now it happened that this turkey was the largest and most beautiful bird Irving had ever seen, much less shot. (Actually it was the only bird Irving had ever shot—having been a tailor in London until a few months before.) He ran home trailing the carcass behind him and shouting triumphantly, but his wife Mabel (people were really named that back then) stopped him at the door. “Clean that bloody thing outside,” she said.  “I just did the floors.”

That afternoon the Indians were in town for a doubleheader. A potluck was scheduled between games and Irving proudly brought his turkey. “Want  some?” he asked Rich Garcia, captain of the Indians.

“No thanks, kid, I never touch the stuff,” Garcia responded as he stuffed beans into a corn tortilla.

A little dejected, Irving took the platter with the deceased bird on it over to his cousin Bernie at the other end of the table. “Try some of my turkey. It’s real good,” he said. As if to demonstrate he took a bite out of a drumstick and broke his front tooth on a piece of shot.

“Nah,” Bernie responded. “I can’t handle the cholesterol. I’m sticking with the salad.”

And so it went all afternoon on that first Thanksgiving—neither Irving nor his dead bird were a hit amongst the early vegetarians of the New World. Of course in time the simple way of life of those early settlers was lost, and we all know the ensuing years have not been kind to our feathered friends. No longer do most people crave the bean enchilada or salad. No, ask Americans what they like best about Thanksgiving and you’ll get the same answer from all of them: football.

Mark W. Reinhardt is an attorney, author and long-time vegan who makes his home in Denver.

Your Guide to Rationalizing Away the Holidays
The Christmas Connection