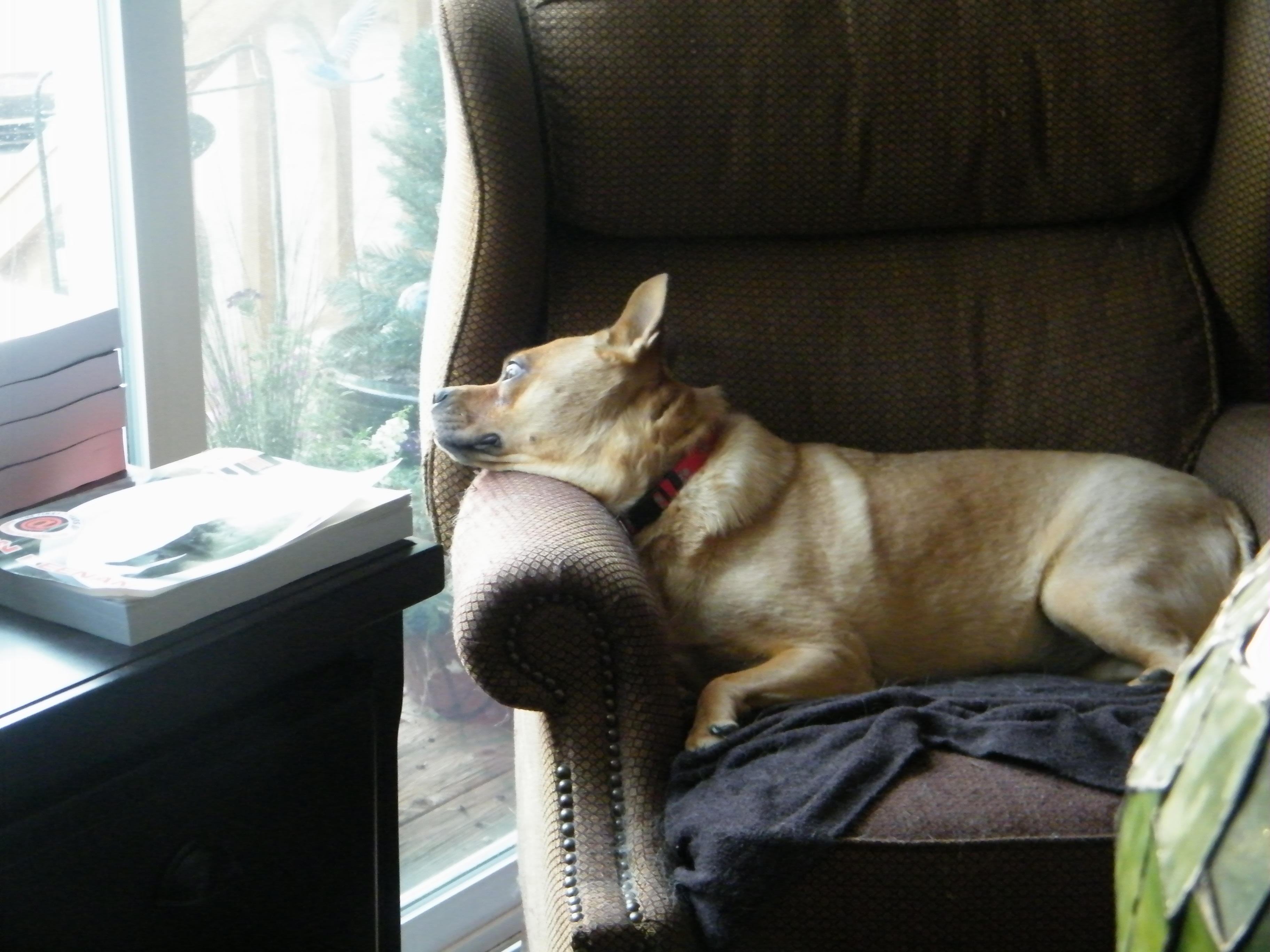 This time she had gone too far.  As I walked into our home I was greeted by a growling canine.  For a brief moment I thought I had entered the wrong home.  But then a familiar voice said “that is Rusty our new foster dog.”

For several years my wife had been fostering senior dogs.  We had the privilege of sharing our home with these amazing creatures during the final months of their lives.  Each senior dog quickly became a “foster failure” because they became permanent members of our family.  Each one was friendly and endearing.  But it was readily apparent that Rusty was neither friendly nor endearing.

We had been without any dog for a few months, and for some unknown reason my wife decided to drive from our home in Colorado to New Mexico to pick up Rusty.  She was known as a “rez dog” because she came from one of the reservations. We could not get her on a leash to take her outside so she quickly ruined the new rug we had just purchased.  After cleaning up the third or fourth mess in two days I was very unhappy with my wife.  Rusty was no more than a year old and I was very worried that she would be a foster failure–not because we would want to keep her, but because nobody would want her.

It was immediately apparent that Rusty had been physically abused.  It was physically evidenced by her missing eye that was the result of an unimaginable act of cruelty.  But it was just as clear that her psyche was even more damaged.  Until her rescue, she lived on the streets.*  The only thing Rusty knew about humans is that they could hit and kick.  She trusted no one.  She would let you know loud and clear that you were not to come within several yards of her.

I know this is a website to encourage plant-based diets.  So you may be asking, what does Rusty have to do with eating a plant-based diet?  For me, the answer is “everything.”  Let me tell you several short stories that illustrate why.

I was slowly able to get Rusty on a leash and take her for walks.  I soon developed a route that had the best chance of avoiding other people and dogs since Rusty went into “don’t come any closer” mode at the sight of other people and dogs.  However, I didn’t think about how she would react to elk.  We live in a rural area and seeing elk and deer is quite common.  One early Saturday morning we were on a long walk and came across a herd of elk about 75 yards away.  In an instant Rusty took off.  The collar snapped releasing the leash.  She was 30 yards away in seconds.  I was sure that was the last time I would ever see Rusty.  The one previous time she got loose it took hours to get her back.

In the commotion I stumbled and fell to the pavement quite hard.  When she heard me fall Rusty suddenly stopped and turned to look back at me.  She paused momentarily and then returned to me.  I will never forget the look in her eyes.  It was the look of concern. She sat by my side as I lay there. She returned because she knew I might need her.  From that moment I knew there was something very special about Rusty.  From that moment I also knew that Rusty Girl was home.

The second story started about nine months after Rusty Girl arrived.  I was confident that we would never have a second dog.  Rusty Girl was and continues to be very aggressive towards other dogs.  We tried various things but concluded that Rusty Girl would be our only four-legged family member.

So you can imagine my perplexity when I came home one night to find a six month old eight pound dog in a kennel in our bedroom.   My wife could see the look on my face, so she quickly told me that Toddy Boy had just had surgery and that we were just fostering him for a few weeks until he recovered and found a permanent home.  I was sure our home would be Toddy Boy’s last home because if given the chance 33-pound Rusty Girl would surely eat him for lunch.  This time my wife had really gone too far.

But we developed a plan that kept Rusty Girl and Toddy Boy separate while we looked for a permanent home for Toddy Boy.  I would take Rusty Girl to my office during the day (that is another story) and at night we would keep Toddy Boy in a protected fenced-in area in the house so Rusty Girl could not get to him.  But something was different about Rusty Girl from the first time she saw Toddy Boy.  She never expressed any aggression whatsoever.  To the contrary, Rusty Girl would lay next to the fence and just look at Toddy Boy.

Of course Toddy Boy now lives with us forever.  We couldn’t bear to break up the two.  They are the best of friends.  If anything, Toddy Boy, who is now 22 pounds picks on Rusty Girl.   In watching Rusty Girl develop a close bond with Toddy Boy it hit me hard that how much we all have in common.  She has emotions.  She was sad and would cry if we put Toddy Boy back into the fenced in area.  She showed compassion.  Rusty Girl was far more humane to Toddy Boy than humans had been to her.

Over the last 18 months Rusty Girl and I have developed a very strong bond.  And that brings me to the third story.  My wife and I recently went out of state to celebrate our 20th anniversary.  Rusty has a sixth sense and knows something is up when she sees me packing a suit case.  She starts to sulk because she knows she won’t be going to the office that day.

Finding a house sitter is a challenge because Rusty Girl is not a people dog.  However, because I have taken her to the office so many times, Rusty Girl has grown to tolerate my secretary, Sue.  I say “tolerate” because Rusty still won’t let anybody else put a leash on her or pet her.  Sue graciously agreed to watch the house and dogs so we could take the trip.

For four days Rusty Girl sat on the chair in my home office and wouldn’t move except to go outside on the deck (we have a fenced deck and a grassed area for the dogs) to go the bathroom.  She would not even move to eat.  Finally, Sue had to take the food into Rusty Girl.  She would get down and eat and then go right back up on the chair.  She exhibited yet another human emotion–missing someone she loved.

The purpose of these stories is to illustrate what dog lovers already know – that dogs have emotions and feelings.  Rusty has shown compassion and love.  She exhibits happiness and sadness.  And this made me begin to think differently about the food I eat.  When I thought of the acts of cruelty that Rusty Girl endured in her early life, my blood would boil.  How could any human be so inhumane?

All of us, especially those of us who live with companion animals, are outraged when we see stories in the news about dog or cat abuse.  Michael Vick became a pariah because of his participation in dog fighting.  Yet I thought nothing of the animal abuse and suffering that went into my lunch or dinner.  Rusty Girl made me reevaluate.

How could I be so upset about the suffering Rusty Girl endured but yet turn away from the suffering of other animals?  There is no question that farm animals feel pain.  They are intelligent creatures and they too have emotions.  As I looked at the food on my plate I started to see the animals instead of the food.  Just as I cannot bear to think of the harm inflicted on Rusty Girl, I could no longer bear to support the factory farming industry that is built upon animal suffering.  Suddenly animal-based food no longer looked appetizing to me.  I finally saw it clearly for what it truly was.  Animal cruelty.

Rusty Girl has shown me that animals are complicated beings with feelings and emotions.  I can no longer play any role in support of their suffering.

It will take time for Rusty Girl’s bad memories to fade, but she continues to heal every day.  I never thought she would bond with a person, but she did.  I never thought she would bond with another dog, but she did.  She has taught me much, but most of all that I never again want to lend support to animal suffering.   Happily, I no longer do so because I eat a plant-based diet.

*Rusty Girl is home as a result of the amazing efforts of Angela Cerci and the organization Rez Dawg Rescue, a 501c3 non-profit organization that rescues homeless, abandoned and neglected companion animals in the Four Corners region of the United States.  For more information on this dedicated organization
See https://www.facebook.com/rezdawgrescue

Doug is an attorney and animal lover who practices in Lakewood, Colorado.