Reflections on an Un-Turkey Thanksgiving 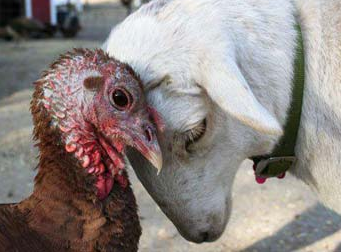 When I was a child, Thanksgiving was turkey day. By the time we got to my grandparents’ house in the early afternoon, the smell of the roasting bird reached clear out to the car. I’d run into the house, excited, and open the oven door to see it. Despite the fact that it looked done to me, it would always take what seemed like an eternity to get everything ready to eat. My job was mashing the potatoes that would serve as the receptacle for turkey gravy. It was a simple procedure, but one entirely dependent on adding just the right amount of milk. A more complex task, left to my father and grandfather, was dissection of the great bird. I was convinced that it was a job that required not only my constant supervision, but also my occasional nibbling fingers to remove small pieces that fell by the wayside and would otherwise go to waste. When we were finally ready to eat, there would be the yearly battle between my great-grandmother and me over the parts of the turkey we liked best. She always let me win.

After the main course, I have memories of multiple pieces of pie with whipped cream and card playing on the big round table—once it was cleared. Then, later that night, and for some days thereafter, there would be turkey sandwiches, always on white bread with mayonnaise.

I look back on the Thanksgivings of my youth with mixed feelings. I remember at times I would think about the turkey as a real animal rather than just a meal. At those times, I would feel bad, wondering why this bird had to give his or her life for the sake of our supper. I would ease my conscience with the thought that Thanksgiving and turkey were synonymous—you couldn’t have one without the other. Not only was turkey the whole point of Thanksgiving, but it was something that everyone, including my family, subscribed to—it must be right! But even if it wasn’t, there was nothing a young boy could do about it.

I’ve learned a lot since then. I know now that, while it can’t be denied that a certain amount of tradition has evolved around eating a turkey as the main dinner course, and while that tradition holds memories for lots of us, that doesn’t make it right. Eating turkeys is not the whole point of Thanksgiving. The slaughter of a bird is no closer to the meaning of the holiday than are the Macy’s parade or the football games on the majority of our television sets. There are other traditions to be had for the asking that can be just as enjoyable and even more meaningful. I also know that what matters to me now about those Thanksgivings long ago is not what we ate, but what we were—a family with an opportunity to be together, to share our support and love for one another.

While many of the family members I shared my early Thanksgivings with are now gone, in many ways the holiday itself means more to me now than it ever has. Part of the reason is that I no longer have to endure those tugs at my conscience—there is no turkey on my table. While I once felt powerless to defy tradition and change that one aspect of the holiday that bothered me, I now know that my Thanksgiving is whatever I choose to make it.

This year at our vegetarian Thanksgiving feasts we will all have a great deal to be thankful for. We’ll have the opportunity to celebrate the fruits of the harvest, and to revel in the bounty that the earth provides without the necessity of taking life. There will be good food and good friends.

This year I’ll have my eye on the children, and I’ll admire their parents for raising them as vegetarians. Together with vegetarian families across the country they will be creating new Thanksgiving Day traditions—traditions that carry with them a message of reverence for life that can be passed from generation to generation.

Mark W. Reinhardt is an attorney, author and long time vegan who makes his home in Colorado.