Posted on November 4, 2014  by Doug Meier  No comments
Tweet 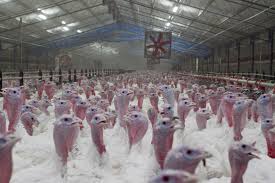 This holiday season many Americans will sit down for a family dinner and in the center of the table will be a turkey.  How much do you know about the turkey that will be the centerpiece of your meal?  Let me introduce you to her.

Benjamin Franklin called the turkey “a bird of courage” and greatly respected her agility, beauty, and resourcefulness.  Mr. Franklin thought so highly of the turkey that he wanted her to be the national bird of the United States instead of the Bald Eagle.  Turkeys enjoy open spaces and can live more than ten years.  They run at speeds of up to 25 mph and fly up to 55 mph.

Like cats and dogs, each turkey has her own unique personality and set of emotions.  They are very affectionate and adore human companionship. Turkeys will sit for hours having their feathers stroked.  Turkeys are very family orientated with turkey hens caring for their babies.  Baby turkeys learn from their mothers what to eat, how to avoid predators, and social behaviors.  Turkeys form deep bonds with each other.

Now let me introduce you to what we do to these wonderful birds so they can end up on our dinner tables.  I believe Benjamin Franklin would be ashamed of what we do to 270 million of these noble birds each year in the U.S.  We have genetically manipulated them to grow to full size in 3-5 months, at which time they are slaughtered.  If a human baby grew at the same rate as these genetically manipulated turkeys, he would weigh 1,500 pounds by the age of 18 weeks.

Turkeys are bred and manipulated to produce the most meat in the shortest period of time, using the least amount of feed necessary.  Most turkeys are bred to have extra large breasts  and 90% of all the turkeys in the world are supplied by three primary breeding companies.  While the meat content of turkeys has increased, the bone structures have not.  Accordingly, most turkeys cannot stand and spend most of their miserable lives lying down.

Thousands of turkeys are confined together in windowless sheds in quarters so tight that their beaks and toes are cut off so they will not hurt each other.  After being debeaked, millions of turkeys stop eating and starve to death.  Conditions are so poor that industry production rates are set to absorb a mortality rate of up to ten percent – 27 million deaths each year in the U.S. due to poor conditions.

Perhaps the worst, if that is possible, is waiting for turkeys when they arrive at the slaughter house.  Turkeys are not protected by federal regulation during slaughter.  This means that they do not have to be rendered senseless before they are killed.  These poor birds often die a slow and painful death, many being boiled alive to loosen the feathers.

This Holiday Season we will be sitting at the family dinner table with kind and moral family members and friends.  Not a one of them would inflict suffering on an animal, yet they are willing to pay to eat a poor animal that suffered its entire life.  Why?

Author Sherry Colb (“Mind If I Eat a Cheeseburger?”) writes that violence against animals arises not because we are bad people, but out of social traditions that prevent us from fully appreciating the implications of our actions.  Eating turkey on Thanksgiving and other holidays is a long social tradition in the U.S.  But many social traditions change when we understand how they conflict with our values.  It is time for the holiday tradition of eating turkeys to end.  Most Americans hold the values of compassion, kindness, and hope.  Let’s start reflecting those values in what we eat at our holiday meals.

And happily, it is very easy to create a wonderful Thanksgiving or holiday feast without any animals or animal products on the menu.  There is a large assortment of store-bought products that render turkey meat unnecessary.  Perhaps my favorite is Field Roast Celebration Loaf.  And side dishes are easy too.  Everything from stuffing to cranberry sauce to pumpkin pie can easily be prepared vegan.  For recipes, go to www.veganseatwhat.com.

What do vegan men say?  Let’s fill our plates this Holiday Season with compassion and kindness, not animals.  When you meet your meal, I hope it is a cruel-free vegan meal.

Doug Meier is attorney that practices in Colorado and writes this monthly column, Vegan Men Say What?  He is looking forward to a wonderful vegan Thanksgiving this year prepared by his daughter in New York.