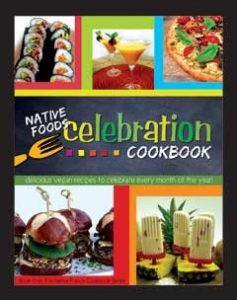 Help support VegansEatWhat.com by buying this book from our Amazon link!

For those of us fortunate enough to live in an area where Native Foods Café has restaurants, we already know about their version of delicious vegan fast food.  With the influx of new funding, Native Foods is continuing to expand to provide even more venues that offer their tasty foods and recipes.  This year on their twentieth anniversary, they published their Celebration Cookbook.  This is the second cookbook Native Foods Café has published.

We recently had the good fortune to attend one of Native Foods Café’s free cooking classes.  Chef Susan A. Hunter (also known as Chef Green Vees) is a member of the experimental kitchen based in Chicago.  She told us that the cookbook contained recipes designed by Native Foods Café’s staff of experienced, vegan chefs.  Twice every year each chef submits 10 recipes to be considered for the regular menu at the various Native Foods restaurants.  Many of the recipes that did not make the menu ended up in the cookbook.  This does not mean that these recipes are inferior in any way; they simply may have not complemented the existing items on the current Native Foods restaurant menus.

We have tried a handful of recipes from the cookbook thus far.  A few made it to our “favorites” binder, most notably the “Beefy Bourguignon” (although we reduced the amount of seitan in the recipe based upon personal preference).   One recipe I still intend to try is the baked potato knishes (The “Delish Knish”), a dish that recalls for me the street food of New York City that I grew up eating.

A plus to the book is that it provides recipes for specific seasons and holiday including categories for football season (‘Touchdown’), Cinco de Mayo, Trick ‘n’ Treats, ‘Thanks-and-Giving’ as well as for cookie exchanges.  The book also provides some very attractive photos of many of the dishes recommended in the text.

If you are looking for a recipe that replicates a favorite dish at one of Native Foods restaurants you are likely to be disappointed.  The biggest drawback to the book is that it only includes a few of the many delicious recipes served in Native Foods’ restaurants.  Additionally typos and occasional missing words make some of the recipes difficult to follow.

The book features many recipes designed to serve 10 or more people which may or may not be a plus depending on the size of your household and available freezer space.  While I am not sure that this will be the cookbook for everyone, particularly beginning or inexperienced cooks, I readily endorse the Native Foods Café premise of vegan fast food.