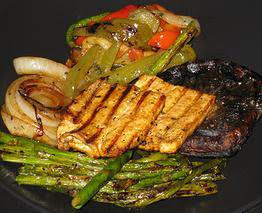 It’s summertime. The time we all put on our Ray Ban Wayfarers and head for the surf (or pool in my case). Time for cruising up to the drive-in with Beach Boys music blaring from the radio. Time to engage in that great American warm weather tradition—the vegetarian barbecue.

Okay, so maybe barbecuing isn’t the thing most people think of in vegetarian summer activities. It does seem odd that health conscious vegetarians would ever want to coat their food with a possibly carcinogenic (and definitely not healthy) layer of soot.

Nevertheless, we vegetarians do barbecue, and I think it’s probably one of those things we do better than meat eaters. Think about it. Our barbecued meals have to be more creative than meat eaters’, and they never suffer from the “Gee, Dad, how come this chicken’s black on the outside and raw on the inside?” syndrome.

When I say “we vegetarians” do a better barbecue than meat-eaters, I’m of course not referring to myself. Actually I’m lousy at it because I have one failing that severely hampers my barbecue ability—I can’t light a fire.

Oh, I’ve tried. I’ve doused the charcoal with enough lighter fluid to have our patio listed by the EPA as a major hydrocarbon polluter.  And I’ve tried that expensive kind of charcoal you’re supposed to be able to light with a match, too. I couldn’t light it with a blowtorch. My wife Susan thinks it’s because I’m a Pisces. Water signs can never light fires, she says.

We barbecued the other night. I tried an electric fire starter I found at a garage sale. You’re supposed to be able to plug the thing in and have a hot bed of coals in ten minutes. After about an hour my grill seemed to be warm and, even though I’d used enough power to cause a brownout in a three-county area, I was proud of myself.

I put the food on and sat back, awaiting those wonderful carcinogenic smells of barbequing food. About two hours later (I think it was almost dark) Susan began inquiring as to when we might eat. I checked the grill.

“Looks like this baby’s done,” I said, holding up a limp slice of onion. “Maybe we should keep it warm inside while everything else finishes up out here.”

She looked sadly down at the grill and tried to feel if there was any warmth at all coming out of coals. Her stomach growled. I knew what she was thinking—maybe we should put it all in the oven.

That reminded me of the sayings of Confuscious, which I try to memorize for appropriate moments like this. “Many man bite,” I responded, “but fu-man-chu.”

My friends Fred and Blake (neither of whom are vegetarian) have the right idea about barbequing. Fred gave up on charcoal a while back and bought a gas grill.

“But how do you get that good carcinogenic barbecue flavor?” I asked him.

“Ah,” he said, his eyes lighting up. “Soaked wood chips tossed in on the burner.”

The true modern solution to barbequing, I guess.

I hope more vegetarians will take up barbequing, and that one day we can dispel its image as an activity dominated by meat-eaters. I have a vision of the suburban backyard of the future. A bunch of kids are playing on the swing set and some women are setting out potato salad and iced tea on the picnic table. Three paunchy, middle-aged men stand with utensils in their hands, staring blankly into a smoking grill.

“How do you fix your tofu, Ralph?” one asks. “Mine always comes out dry.”

Almost anything barbecues well if you first brush it liberally with olive oil. My favorites are:

Also try chunks of potatoes (cook inside until almost done) and onions. When brown, put in a bowl with more olive oil, dill weed, dill seed, pepper, and minced garlic.

For the traditionalist, all kinds of plant hamburgers and hot dogs barbecue well.

Even better is tempeh. Slice it thin and use plenty of good barbecue sauce. (Look for molasses instead of sugar on the label.)

Mark is an attorney and author and lives in Denver, Colorado.  His book “The Perfectly Contented Meat- Eater’s Guide to Vegetarianism” can be purchased at our store.

Vegan Men Say What? Is Everything Better with Porcine Plasma?
7 Terrific Toppings for Veggie Burgers