But My Family Would Never Eat Vegan, Kristy Turner (The Experiment, LLC, 2016) 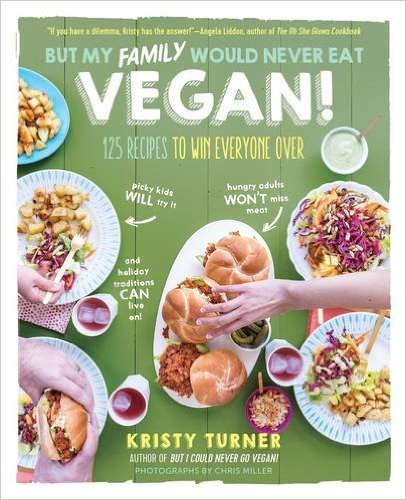 Help support VegansEatWhat.com. Purchase this book via our Amazon link!

Creating a sequel that is as good, or better, than the original is no easy task.  This is particularly true when the original is so well done. Occasionally, however, a sequel will actually improve on the original.  Such is the case with Kristy Turner’s second culinary creation, But My Family Would Never Eat Vegan.  This family-friendly cookbook demonstrates – at times quite humorously – how to create flavorful vegan cuisine that keeps everyone happy, whether they are vegan or not!

Turner is author of But I Could Never Go Vegan and creator of the blog “ Keepin’ It Kind”.  Turner’s second cookbook But My Family Would Never Eat Vegan knocks it out of the culinary ballpark with wonderfully executed vegan recipes for dishes ranging from childhood favorites and baked goods to decadent snacks and dishes to start new holiday traditions.

But My Family Would Never Eat Vegan: 125 Recipes To Win Everyone Over  is not just a fabulous cookbook for vegans.  It is a cookbook for anyone who has a vegan friend, a vegan family member or who is simply curious about vegan cuisine.

Recipes are divided into twenty chapters and almost all are accompanied by mouthwatering photos.  Included in the chapters are a glossary of ingredients, recipes for vegan basics like cream of mushroom soup and vegan bacon, a “how to” section with instructions for cooking legumes and grains, pressing tofu and measuring flour, and tips and tricks on veganizing favorite recipes.

Additional chapters cover everything from:  “Vegan Food for Your ‘Meat and Potatoes’ Family Members”, “What Will We Do about Birthdays/Graduations & Bridal Showers”, to “Vegan Meals That Health Nuts Can Get Excited About”, “Kid Friendly Vegan Meals” “Romantic Vegan Meals” and even “Homemade Vegan Food Gifts”.

Like the recipes in Kristy’s first cookbook, the recipes in But My Family Would Never Eat Vegan inspire readers to cook.  I made several recipes in the book including the Chickpea Caesar Pasta Salad, Jackfruit Crabless Cakes with Lemon Dill Aioli, Cauliflower Alfredo Baked Ziti, Maple Miso Tempeh Cutlets, Easy Tahini Gravy and Herbed Tofu Burgers.  The Easy Tahini Gravy was a big hit and equally good over biscuits for breakfast as it was over mashed potatoes and peas at dinner.  The Chickpea Caesar Pasta Salad and Jackfruit Crabless Cakes were equally well received. There are so many more recipes in the book that I want to try including the Lazy Vegan Chile Relleno Casserole, Silky Cheese Fondue, Cauliflower Parmigiana, Cheese Stuffed Meatballs, Mushroom & Kale Spinach Hash, and Tempeh Sausage Minestrone. 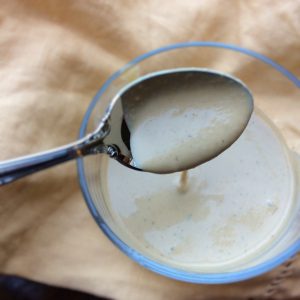 Easy Tahini Gravy From “But My Family Would Never Eat Vegan”

Kudos to Kristy for deliciously sharing how exciting and substantial vegan food can be. If you are vegan or just know someone who is, But My Family Would Never Eat Vegan is a cookbook that belongs in your kitchen!  Buy it for yourself or for someone on your gift list. 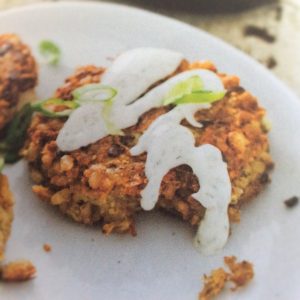 Jackfruit Crabless Cakes from “But My Family Would Never Eat Vegan”

Below is a recipe from But My Family Would Never Eat Vegan that I think your family will enjoy.  I know mine did.

Chop each tempeh block in half horizontally, then chop each half diagonally so you have eight triangles.

Discard the water from the saucepan.  Combine the vegetable broth, liquid aminos, maple syrup, miso, sage and thyme in the pan and stir to mix.  Add the tempeh triangles and bring to a boil. Once boiling, reduce the heat to a low simmer.  Let the tempeh simmer in the sauce for 10 to 12 minutes, flipping them once halfway through, until the sauce is absorbed and starts to caramelize.  Remove from the heat and add salt and pepper.  Serve immediately.  Leftovers will keep in an airtight container in the fridge for 4 to 5 days.