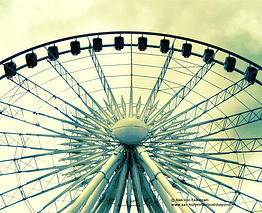 As the sun sets in the western sky, the brightly colored lights of the carnival midway come up. Over the laughs and screams of the children on the Ferris wheel and the sound of the carousel in the distance, a voice can be heard.

The crowd gathers around a carnival barker dressed in a red and white-striped jacket with a straw hat. He dances a little jig and then starts his pitch.

“We’ve got trouble,” he says, “right here in River City. With a capital ‘N’, and that rhymes with ‘M’, and that stands for Meat!”

“But ‘trouble’ doesn’t start with ‘N’!” someone cries.

“That’s okay folks,” the man reassures the crowd. “The point is—and thank goodness I’m here to tell you—that when you weren’t looking killer meat snuck into your little town. You can smell it on your neighbor’s breath, and I’ll bet you dollars to donuts that little Johnny’s passing it to his friends at school!”

Then someone in the back shouts, “Wait a minute… we like meat.”

“So you think,” the man in the striped jacket says. “But wait ’til I tell you about the evils of killer meat. You, sir…” He points his cane to an overweight man at the front of the crowd.

“You suffer from gout, do you not?”

“Wouldn’t it be worth giving up meat to get rid of that pain?”

“No,” the man says without a pause.

“How about if it would make you thin besides?”

The man shakes his head and snarls. “Still not worth it.”

“How about if it would prevent that heart attack you’re going to have next year?”

The man is angry now. He turns and stomps away through the crowd.

The carnival barker looks frustrated. “You,” he says, pointing the cane at a college student. “You’re an environmentalist.”

“You bet I am,” the young woman says proudly. “I even recycle toilet paper.”

“Well then, certainly you’ll give up eating killer meat once you learn that animal agriculture is our biggest consumer and polluter of both land and water.”

The woman considers this for a second and then shakes her head. “Sorry, I’m notthat much of an environmentalist.”

The carnival barker pushes his hat back and scratches his ear. The crowd is growing restless, and beads of sweat have formed on his forehead.“How about you ma’am,” he pleads to a woman standing with her arms around her little boy. “Your heart has always gone out to every animal in distress you’ve come across. Wouldn’t you give up meat to save the billions of innocent creatures mistreated and killed in our slaughterhouses?”

“Wouldn’t you take meat off your family’s table to protect the innocence and health of your little boy?”

At that moment a man in a cow suit appears. He’s wearing a sandwich sign that reads: “Come Eat at Jack’s Burgers and Shakes—Conveniently located next to the fat lady’s tent.”

“Can we go get a burger?” the young boy asks excitedly. “They’ve got a real clown and a playground and everything!”

The woman gives a helpless smile to the carnival barker and hurries her son away.

“Don’t go! Please don’t go!” the barker calls after her, but by this time the crowd has lost its patience.

“He’s just a huckster!” someone shouts.

“He’s a charlatan!” someone else screams.

“Yeah, send him back to Charlotte!”

The angry crowd starts to close in around the man, and he holds up his cane in self-defense. “Hey, wait a minute!” he shouts. “I’m only trying to help you!” A tomato flies out of the crowd and hits him on the side of his face, knocking his hat off. Suddenly he realizes it’s no use, and he takes a step back, frightened.

The crowd starts chanting, “Give us milk, and give us meat. Those are things we love to eat! We want burgers, we want shakes. We’ll eat whatever the animal makes!”Then, as a group, they turn and march off in the direction of Jack’s.

The barker lets out a sigh of relief, thankful that the only damage was done by one tomato. Someone comes up by his side, and he sees that it’s the carnival owner, a grizzled old man with a Western tie and a frayed vest, a cigarette dangling from his lower lip.

“That was a close one,” the old man says.

The old man shakes his head and toes the dirt with his boot. “You know, I’ve been in the carny business for forty years now, and I’ve found that everywhere I go people are all pretty much the same. You can get them to fall for the cheapest illusion, just as long as it’s what they want to believe. But if it’s something they don’t like, well… they’ll fight you tooth and nail. It’s part of human nature, I guess, and you can bet on it every time.”

“Sounds pretty depressing to me.”

The old man puts a comforting hand on the barker’s shoulder. “Don’t worry,” he says confidently, “keep trying and you’ll convince them in the end.”

“You’re telling the truth, aren’t you?

“Well,” the old man smiles, “that’s something else about human nature.  After all the lollygagging people always come around to the truth. It may take a good long while, but we humans manage to get it right in the end. And you can bet on that every single time too.”

The barker is filled with new hope.  He walks down the midway then tilts his hat forward and dances another jig with his cane.  Above him children laugh as they go around and round with the bright lights of the Ferris wheel.

Mark Reinhardt is a writer, lawyer and long time vegan.  Welcome back Mark!

The True Meaning of Thanksgiving