A Dinner With Friends

Posted on December 9, 2017  by Mark Reinhardt  No comments
Tweet 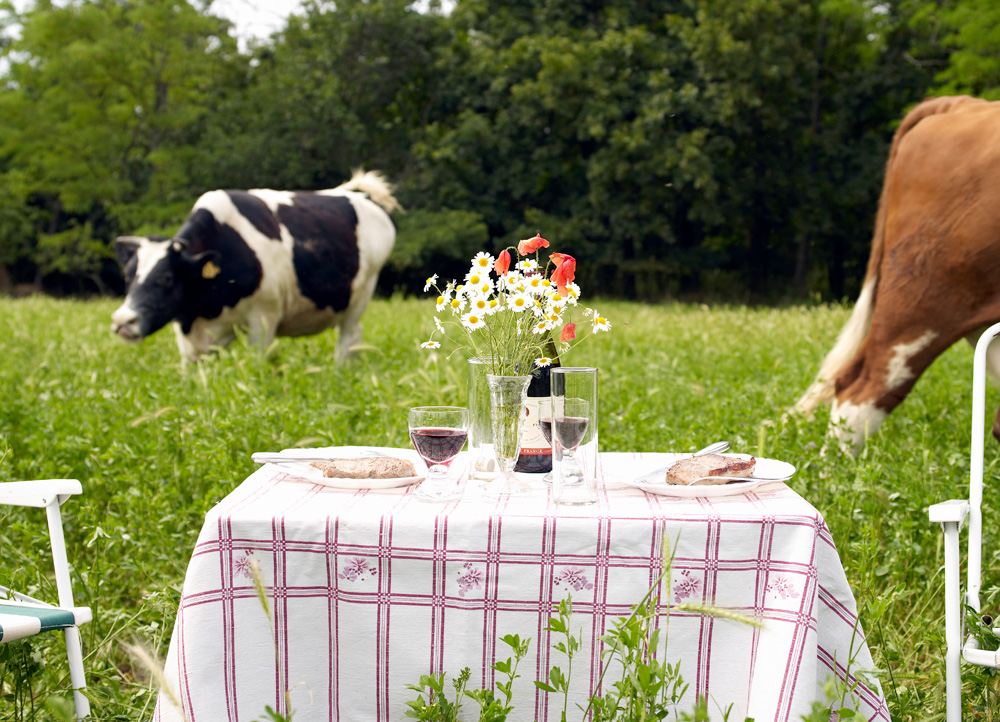 Many years ago when I became a vegetarian (this was during the Coolidge administration) there was only one reason for my decision—wanting to be nice to animals.  That was all that really mattered to me.

Sure, even back then people knew that vegetarianism was a lot healthier than eating meat, even if we didn’t have the benefit of knowing all about saturated fat and antioxidants, not to mention Dr. Atkins’ heart attack.  I knew that giving up meat was good for me, and I figured it was kind of a bonus I got for eating ethically—sort of like extra points for being a nice guy.  But it really didn’t make much difference.  I was young then and, just like everyone else my age, I figured I’d live forever.

My diet reflected this general level of stupidity.  When I gave up meat I moved into dairy products with abandon.  I’d think nothing of following a Fettucine Alfredo dinner with cheesecake for dessert.  My favorite lunch was American cheese on white bread, “grilled” in the microwave.  I knew that omelets, and even ice cream, had to be good for me because, what the heck, all those ads plugging milk and eggs as high protein health foods couldn’t be wrong.

Well, it’s the sophisticated teens now.  Mr. Coolidge is no longer president, and things seemed to have changed.  For one, I’ve graduated from being a vegetarian to a vegan, of course. My diet still has nutritional holes in it big enough to drive a Mack truck through.  But it’s a better diet than it used to be.  And somehow that matters more to me now.

There’s a certain wisdom that comes with advancing age.  …Okay, maybe a better term for it is “crisis mentality.”  In any event, when we reach that status in life it inevitably hits us that we’re not going to play center field for the Yankees, Hollywood is never going to come calling, and oh, by the way, our bodies are slowly disintegrating before our very eyes.

I’m awfully glad to have veganism along to help me through this crisis.  It won’t make me live forever, and may not even see me through to old age, but I know now that I’m a lot healthier than I would have been if I hadn’t given up meat, and then dairy products, in the foggy, distant past.  And the difference is going to become more pronounced as time goes on.

All of this was brought home to me recently when I went out to a restaurant with a group of my meat-eating friends after a concert.  I looked around the table and realized that they were eating just like I once did, and it wasn’t doing any good for their middle-aged bodies.

Hamburgers were the food of choice that night.  As I watched my friend Bill eat his, I noticed that the paunch of his stomach was getting larger every time I saw him.  Coincidence, I wondered?  In the chair next to him Pat was still looking trim as she downed her burger, but she was talking about her high cholesterol level.

Cholesterol was an even bigger problem for Bill #2, sitting across from them.  His blood-cholesterol level was seriously high, and he was due to go in for another test the next day.  As he finished his burger, though, he noted that it had come down since he’d “improved” his diet.

My friend Kevin was sitting on my right.  “I can’t eat burgers anymore,” he complained.  “My colon can’t handle them.”  He ordered the chef salad instead.  As I watched him eat the cheese and eggs and various meats with the creamy dressing, I wondered if there was any lettuce under there.  I didn’t see any.

Susanna wasn’t eating a burger that night either.  “I eat very little beef,” she said proudly as she took a bite of her club sandwich of turkey, “ham” and “bacon” on white bread with mayonnaise.  Very healthy indeed.

Across the table was Jim.  He’d gone through bypass surgery a year earlier, and for a while his diet had changed.  But now he was biting into a hamburger.  “Ah,” he said, a big smile coming to his face.  “There’s nothing like the taste of a burger.”

Finally there was Lori, sitting on my left.  A delightful but shy woman, she had health problems that required her to always be on oxygen, and she’d recently been diagnosed with breast cancer.  “I really need meat protein,” she said twice—once to convince herself, and then again to me.  “Will you be offended if I order a burger?”

She looked at me with pleading brown eyes and a face that was too thin and tired, the oxygen tube running up to her nose.  My heart was breaking.  I wanted to tell her about the link between animal fat/protein and cancer.  I wanted to get her started on the right track by cooking her a good vegetarian dinner of green vegetables and grains.  I wanted to be able to hug her and sincerely tell her everything was going to be all right.  But I knew I couldn’t do any of those things.  A lifetime of habit and bad information are hard to undo, even though I’d been trying for years with all my friends.

“No Lori,” I finally said, feeling helpless but smiling so she’d feel at ease.  “I won’t be offended if you order a burger.”

I lied, of course.  When meat starts hurting my friends I’m plenty offended.

What Do Vegans Eat on Game Day?